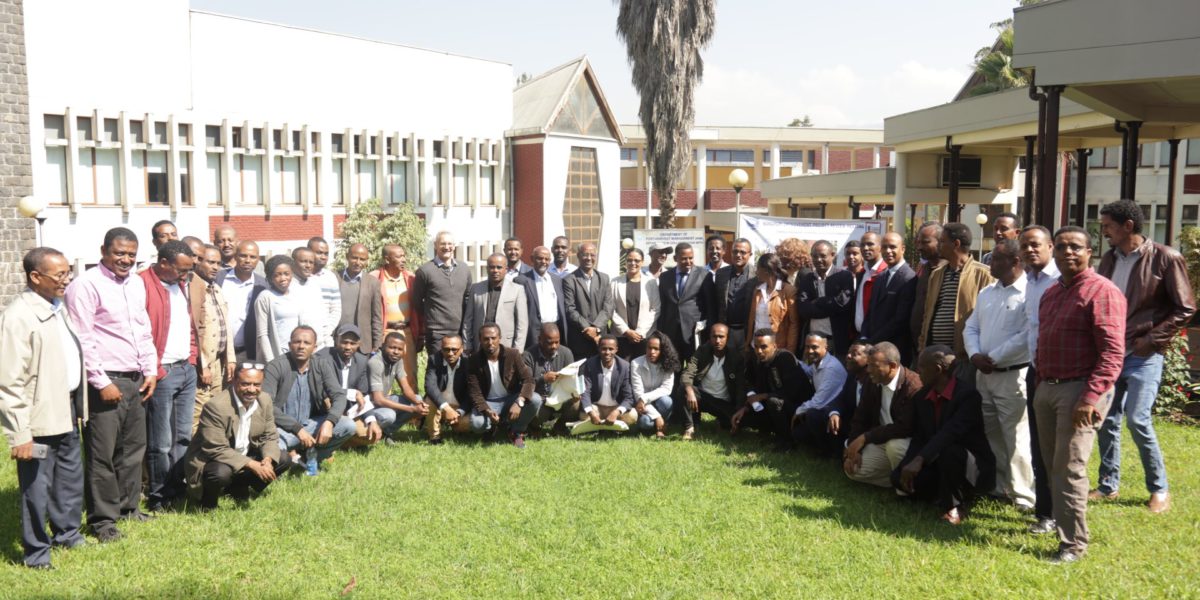 The review workshop was targeted at evaluating the performances of two Sorghum Improvement projects against the goals set at the inception of the projects. The projects are “Advancing the Productivity Frontier for Sorghum (AFPS)” funded by the USAID and “Characterizing the Ethiopian Sorghum Germplasm Collection for Drought Adaptation (PEARL)” funded by BMGF. Beyond the review of the performances of the projects, the meeting also involved scientific discussions on the issue of the country’s vulnerability to drought, its effect on the GDP and on how to deal with it through scientific and technological solutions.

The workshop began with the welcoming address from Dr. Fikadu Mitiku, the Dean of College of Agriculture and Veterinary Medicine. who reflected in his address that review meetings conducted after the successful running of impactful projects such as the Sorghum Improvement projects hosted by the college are valuable in various aspects Dr. Fikadu appreciated the remarkable achievements of the projects in establishing research labs, enhancing capacity building for staff and students and the commendable research outputs and acknowledged the contribution of the funding organizations, partners and the manager of the project

Dr. Tsige Ketema, Vice President for Research and Community Service addressed in her opening remarks that engaging in project reviews is a culture JU cherishes as it not only reveals the achievements and challenges, but also that it presents the opportunity to learn and chart an efficient handling of other projects. Dr. Tsige extended the University’s gratitude to the the funding organizations of the project USAID and Bill and Melinda Gates Foundation, and the partnering Universities, University of Georgia (USA), University of Queensland (Australia), CRISAT (India), ARC (South Africa), and The land Institute (USA) for contributing towards the implementation of the projects. She stressed that such partnerships contribute towards internationalization endeavors of research and academic at the University and expressed JU’s readiness to contribute towards the aspiration of the project to become the center of excellence for crop improvement and plant breeding and biotechnology.

Professor Kassahun Bante, the coordinator of the projects at Jimma University, presented an overview of the project from its inception to the current status elaborating the course of its achievement and the visible impacts the projects brought. He highlighted the major research and capacity building achievements the projects brought. The achievements from research side highlighted includes: successful root characterization of Ethiopian sorghum germplasm collection, mapping of chromosomal regions associated with root traits using Ethiopian materials, establishment of the relationship between root angle and grain yield under moisture stress conditions, successful introgression of drought tolerant traits into elite Ethiopian variety from exotic donor lines, mapping of chromosomal regions associated with important agronomic and drought tolerance traits, assessment of genetic diversity of Ethiopian sorghum germplasm which provides valuable information to sorghum breeders and gene bank managers and identification of potential drought tolerant sorghum germplasm which will be used for sorghum breeding. On the side of capacity building, the projects contributed in the training of 11 PhD and MSc students, establishment of Molecular breeding laboratory and establishment of high throughput root phenotype facility at the college.

The meeting involved paper presentations and small group discussions at which international and national scientific research out puts and experiences were shared. Prof. Andrew Borrell for instance presented the experience from Australia in his presentation titled “Key Drought Tolerance Traits and Australia’s experience in Managing drought”. Other presenters also shared their scientific findings pertinent to history of sorghum improvement in Ethiopia, the causes and effects of drought, Ethiopian sorghum landscapes, drought tolerant traits, genetic diversity and mapping. A total of twelve scientific papers were presented in the two days meeting, and finally the participants held a panel discussion on the theme of “Managing and copping with drought under Ethiopian situation” at which key reflections were made on how to deal with the issue scientifically in the future.

The review workshop was concluded with the closing remark from Dr. Adula Bekele, Vice president for Academic Affairs who appreciated both the successful management of the project and the fruitful discussions at the review meeting. He stressed in his final remarks that Jimma University is committed to support such scientific endeavors and to create a conducive environment for the establishment of the center of excellence aimed at.