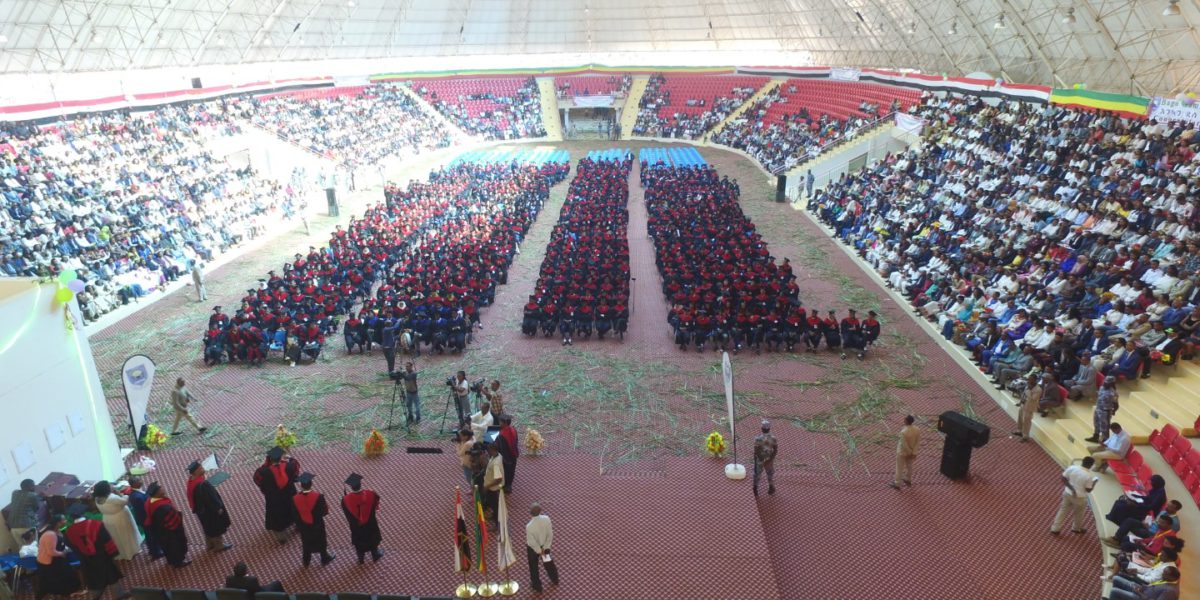 On the 22nd of February, 2020 JU held a very colorful first round graduation ceremony of the Academic Year in the presence of members of the university senate, other invited guest and families of the graduates at the Mini Stadium of the main campus.

A total of 3139 students have completed their study and graduated at the ceremony of which 8 are PhD, 699 are at Masters, while 2440 were BA/Bsc level. 237 of the total graduates are Medical Doctors and 27 are Dentistry Doctors. 26.5% of the graduates were female. Thirteen of these graduates were also international students from Rwanda and The Republic of Somaliland who finalized their studies at post graduate level. Eleven students graduated from Somaliland were from our branch Campus located in Hargiesa where JU professors travelled to deliver lectures and supervise students’ research projects.

Dr. Adula Bekele, V/P for Academic Affairs of JU, highlighted the core activities of the university all the way through half of the academic year. He stated among others that the University has digitalized its students’ registration system, conducted the 4th East Africa Finance Summit in collaboration with the i-Capital Africa Institute on the contribution of local Financial Institutions to the realization of home grown economic transformation agenda initiated by the Ethiopian government, provided 5.6 million birr worth of medical equipments to Woreda Health Centers’ at Jimma Zone and organized a donation week that supported 1300 students of Jimma Town. Moreover, 184 patients received free cataract surgery services and digital literacy training has been provided to employees of government office in Jimma Town and Jimma Zone.

Dr. Jemal Abafita, President of JU, and guest of honor of the event, emphasized JU’s strong move towards internationalization which has been reflected through its teaching, research and service functions. He underlined that JU has started the academic year with is student population of more than 47,000 of which 168 are international students from several African countries. On top this JU has been working with several international partners across the globe and will continue to collaborate with many more as part of its set vision of becoming one of the leading university in Africa and renowned in the world by 2025. The fact that our university is designated to be among the few research universities in the country is also indicative of the need for our planned move towards internationalization as quality in education and research can be enhanced by opening ourselves up to the global arena.

He also assured to the audience that JU will continue its efforts of improving quality in education and research and strongly engages itself with the community. All its locally and internationally funded projects are directed towards conducing need based scientific research and providing direct services to the community based on scientific research outcomes. He also added that, JU is always committed to peace and the management and all organs of the institution will exert their utmost efforts to ensure peaceful and conducive teaching and learning environment. To achieve this, according to him, all stakeholders were brought on board and conveyed his gratitude for their unreserved efforts in the process of achieving a stable academic environment.

He emphasized that the future of Ethiopia is in the hands of the educated young generation and today’s graduates should be ready and committed to realize their knowledge and competence to ensure peace, prosperity and development in their country. Particularly, he called for the ethical and committed serviceman ship of the medical graduates. He said that they are graduating at a time when the globe is challenged by epidemics that at times became even beyond the control of the most powerful nations in the world. Consequently, he kindly advised the graduates to make the most use of their respected profession to serve their community who have been with them all the way through and helped, cared, supported and educated them to this successful day of their career.

Later on during the graduation ceremony, the graduates from Somaliland were called to the stage and given the opportunity to reflect their views. They conveyed their gratitude for the Ethiopian government in general and Jimma University in particular for opening up such a very good quality Masters program in Human Nutrition at their home town, Hargeisa, that made the training very accessible to them and helped them to attend their studies without being detached from their family and regular duties.

Finally, the Head of the Registrar Mr. Buruk Woldemichael and Deans presented the graduates in their respective colleges and outstanding students from each program have also received awards from the guest of honor, Dr. Jemal Abafita