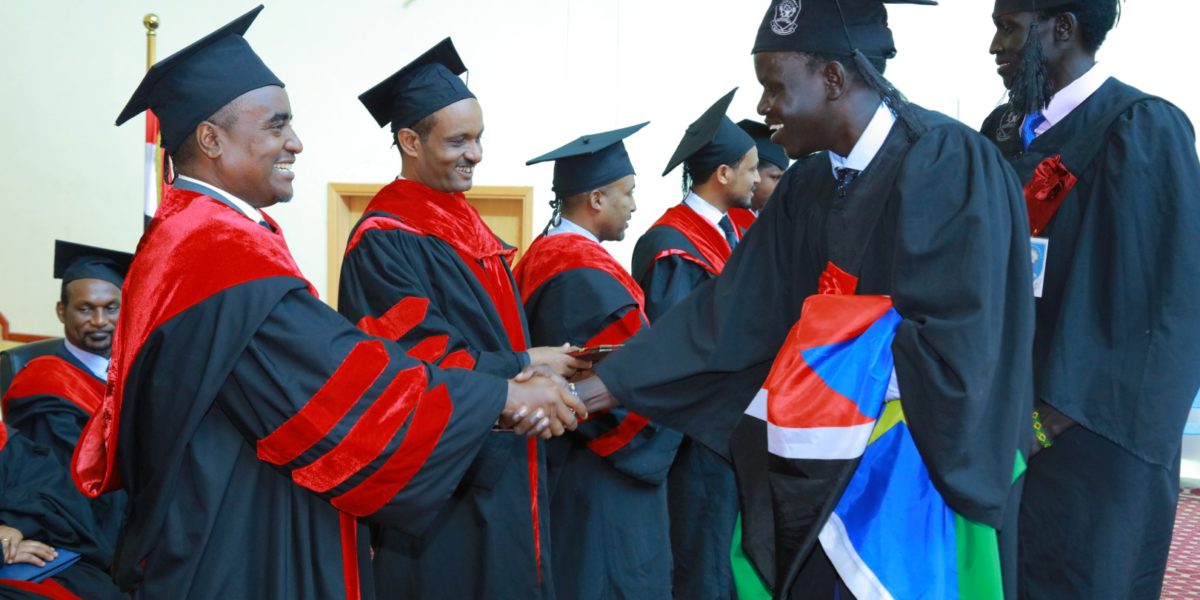 Jimma University conducted the 2nd round graduation commencement of 2018/19 academic year on July 06/2019 in its grand Civic Center situated in the main campus. This colorfully orchestrated event was attended by Dr. Jemal Abafita, President of Jimma University, Senate members of the University, Parents and invited guests.  A total of 2429 (28 South Sudan citizens) students graduated from Institute of Health, College of Law and Governance and Jimma Institute of Technology.

Dr. Jemal Abafita, president of JU and the Guest of Honor, delivered a commencement speech to the gathering, presented the major activities and achievements JU in the academic year. He highlighted that the university has done its level best online planning and reporting software and its functioning starting from this year, scholars at JU are also undertaking problem based and community oriented researches with direct relevance to their surrounding community and the country at large. In addition to empowering the community to resolve its own problems, the findings of the scientific researches have also been used as an input in the policy making process at national level.

Dr Jemal Abafita, in his words reminded the graduates about their expected role as of the graduation day and stressed on the importance of the unreserved contributions they should make to the development and transformation of the country. He, finally, wished the graduates a bright and successful future.

At the second round graduation commencement, the university announced the conferring of honorary staff membership of Professor Asmerom Legesse, the season scholar of Gadaa. Besides, at the grand commencement, 28 South Sudanese graduates who have been on study for the last five years received their diploma from the guest of honor. The South Sudanese graduates extended their gratitude to Jimma University and the Ethiopian government for the chance and promised to foster the bilateral relation between the two nations playing their ambassadorial role back home.

From among the graduates the University awarded scholarship to all female gold medalists. Students who stood first in the Student Research Project competition by developing a device that assists mothers in controlling and managing bleeding after delivery were also given recognition at the commencement.

Presented by the Senior Director of JU Registrar, Mr. Buruk Woldemichael, and Deans / Directors respective college/Inistitutes, outstanding students from each program have also received awards from the guest of honor Dr Jemal Abafita, and Dr Adula Bekele, the vice president for Academic Affairs.