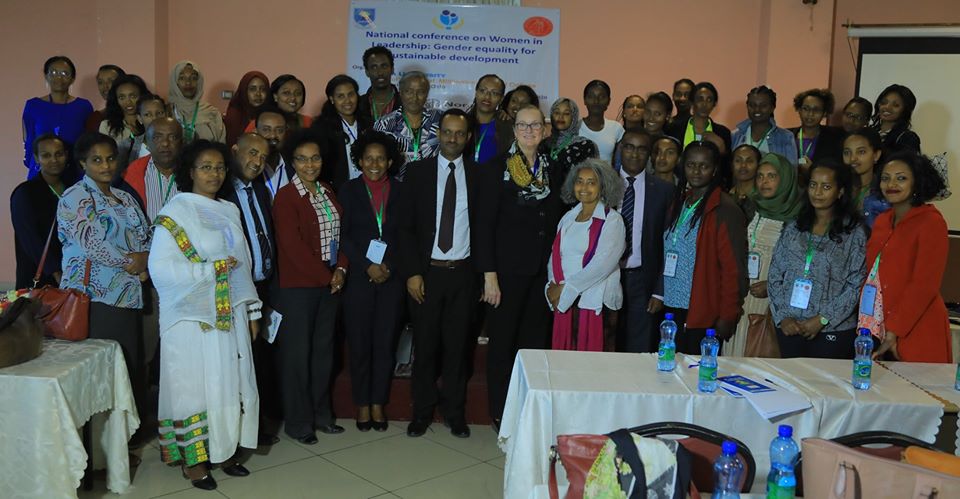 The participants of the conference were women in leadership from all universities in Ethiopia and the conference deliberated on the current gaps and challenges pertaining to representation and empowerment of women in higher learning institutions, and the way forward. The conference also introduced the JEWEL (Jimma Executive Program for Women in Academic and Educational Leadership) initiative which stresses on preparing and mentoring women engaged in academic leadership in higher learning institutions.

Dr Tesfaye Gebeyhu, the acting v/president of Research and Community Service at JU expressed in his welcoming address that the issue of under-representation of women in leadership positions and in research engagement is a gruesome reality in Ethiopian Universities. The guest of honor at the conference representing the Ministry of Science and Higher Education, Dr. Hargewoin Fantahun, also reflected in her opening remarks that gender disparity is still what defines Ethiopian higher learning institutions, despite efforts exerted since the 1990s gearing towards the development of policy and operational frameworks that address the prevalent gaps and challenges to achieving gender equality and equity in the country. She added that the initiatives over the last few years have brought solid improvements in the gender responsiveness of the Ethiopian higher Education system, but the realization of gender parity demands a long way to go.

Several speakers presented papers focusing on the national and international contexts pertaining to women’s representation in the academia, leadership engagement, female mentoring, the practical challenges and prospects. Following the presentations the participants had an informative and serious discussions/debate on the core issues presented on the theme of the conference, and suggested viable solutions toward curbing the intact challenges. Professor Jeannette H. Magnus from the University of Oslo presented to the participants the JEWEL training program and international collaboration followed by reflections from the trainees. Dr. Muluemebet, Dean of Faculty of Public Health at Jimma University, on the other hand, presented a call for action indicating the next steps to be taken to bring desired changes.

The conference was concluded with the closing remarks made by Dr. Jemal Abafita, President of Jimma University. Reflecting on the ideas deliberated at the national conference, Dr. Jemal expressed that the key to removing the hurdles to women’s engagement in top leadership positions lies in bringing change on the mindsets, and unwavering commitment on the initiative to empower women He expressed that there are promising signs that the winds are starting to shift, and recommended that these efforts must be embraced at every level, and must go down to households at the remote corners of the country, and indeed, to all high-level positions. He added that such efforts must go beyond empty discourses on media, and at public gatherings, and must be accompanied with practical steps and measures to remove the hurdles in order to right the intact wrongs. He expressed Jimma University commitment to do its level best to put into effect the ideas deliberated on the conference to work towards strategically addressing gender equality through building on the collaborations it has developed so far.