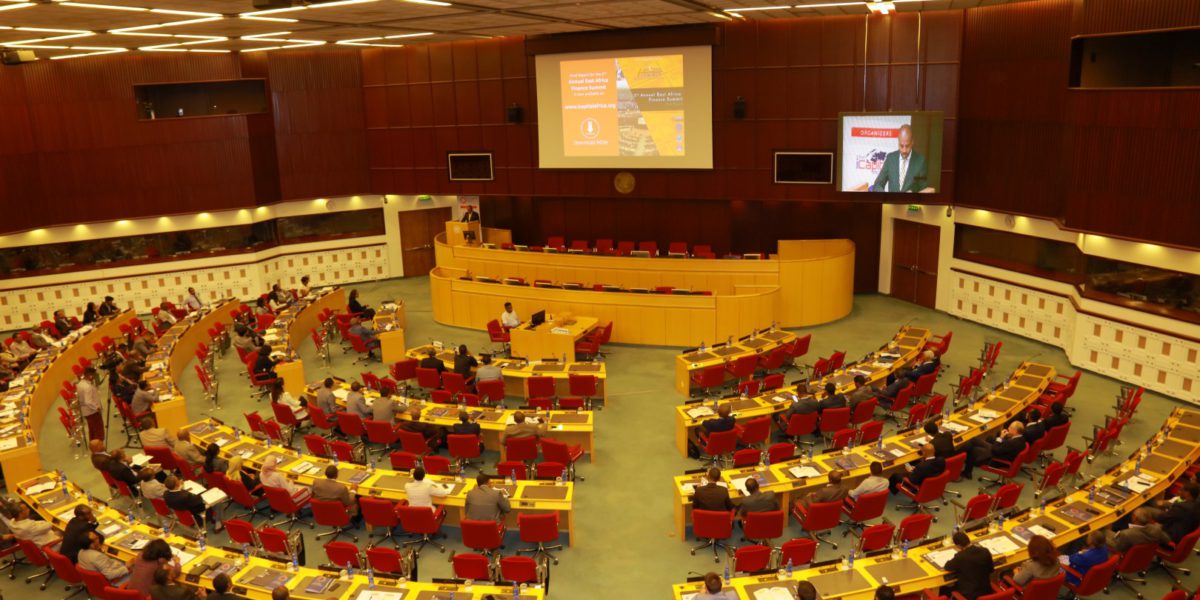 Jimma University, in collaboration with the FDRE Public Finance Enterprises Agency and the I-capital Africa Institute, organized the 4th East Africa Finance Summit from December 4 – 5, 2019 at the United Nations Conference Center, Addis Ababa. The Conference was attended by more than 400 delegates that include financial experts from Ethiopia, Kenya, South Africa, Morocco, Gambia, other African countries and beyond. Active actors of the finance sector, bankers, insurance professionals, practitioners, government officials, and intellectuals have participated in the event. The Summit was held under the theme “Financing Homegrown Economic Transformation: Examining Policies and Practices.”

Dr. Gemechu Waketolla, CEO of the I-Capital Africa Institute, while delivering a welcoming speech, stated that the summit aims at discussing and deliberating on a range of issues that are pertinent to the improvement of financial services in Ethiopia and the region. He reflected that the future of financial services is being shaped by innovations and dynamic regulations and it is important to understand the latest developments around the sector from a global and local perspective which is why successive East Africa Summits are being organized. He finally said that the summit is organized not for the sake of academic discussions and circulation of ideas but to forward concrete and practical inputs to policymakers in Ethiopia and the sub-region.

The Guest of Honor H.E. Dr. Eyob Takelign, FDRE State Minister of Finance , stated in his speech that; The Home-grown Economy Reform agenda serves as a blueprint for the immediate reform measures we must take to address the headwinds our economy is facing as well as seize new growth opportunities. The agenda interlinked challenges at the macro, sectoral and structural levels. The macroeconomic imbalance the country is facing is prioritized as the most detrimental to the wellbeing of our economy today and is afforded the highest priority in the reform agenda. The major microeconomic imbalance- inflation, debt stress, and forex shortage – forces us to focus our efforts on financial sector reform. He also further highlighted that the finance sector in Ethiopia came along way in the last few decades as one of the sectors where the private sector has been blossoming to play its own role in the national development agenda. He further stated that much has to be done to bring the sector up to the level of international standards. The government and other stakeholders according to him, are at a critical juncture to reform the economy which is also true for the financial sector. In line with this, he underlined that the reform measures to be undertaken in the financial sector in the coming three years will be the backbone of the economic reform agenda and will be critical to meet the country’s aspirations. Addressing the capacity and regulatory deficiencies of the sector will be the priority task to be carried out.

Mr. Ermyas Admasu Director for International Relations and Alumni Affairs and delegate of the president at the summit, noted that JU is committed to such initiatives as it is part of its core educational philosophy, Community Based Education and the motto ’We are in the Community’, JU also aspires to play active roles in attaining its corporate social responsibilities by hosting and co-organizing national and international conferences, workshops and summits like this on grand issues that could supplement in accelerating socio-economic development of the country and in this case even in the sub-region.”

He further raised that the role of the finance sector in Africa in availing the required financial resources to support the initiation and accomplishments of homegrown economic reform agenda cannot be overstated. This is in line with the fact that financial sector development is inseparably intertwined with the overall economic development of nations which indicates that building a well advanced financial system could be an important step forward to ensure sustained development. The financial sector is one of the remarkably developed sectors of the economy in Africa in the past few decades and with also huge potential for growth and advancement in the time to come. However, such improvement should much with the development requirement of its people and the pace with which it has to achieve a reduction of poverty and socio-economic prosperity.

He stressed that the finance sector has to aggressively endeavor to build its capacity in providing the financial resources needed to support the initiation and realization of the economic reform agenda. Local financial institutions can play a vital role in the mobilization of saving, and providing finance, when and if, needed by governments for funding locally initiated transformation agenda. In this regard, according to him, governments need to work closely with such institutions by extending support and easing regulatory frameworks for their well-functioning. Developing partnerships and collaborative frameworks to create a conducive policy environment would ensure the efficiency and effectiveness of local financial institutions and their ability to support homegrown transformation agenda.

Various scientific papers are presented at the summit by scholars from higher education institutions and financial sector representatives from Ethiopia, other African countries and beyond. Moreover, panel discussions were also held on selected thematic fields where very crucial policy issues were raised and directions were set for policymakers.